Facebook Twitter LinkedIn Tumblr Pinterest Reddit VKontakte Odnoklassniki Pocket
The Z-series from BMW has stood for topless driving fun since the legendary Z1. The Z4 Roadster has been part of the Munich-based range since autumn 2002, and the third generation of the series has been available since 2018. It caused quite a stir at the market launch – especially the comparison with Toyota’s cooperation model. Because although Toyota Supra and BMW Z4 share the same technical basis, the Japanese version in particular earned praise for its appearance and driving behavior. But that can’t hide the capabilities of the Z4, after all, the rear-wheel drive G29 with its up to 340 hp is anything but a boring daily driver. 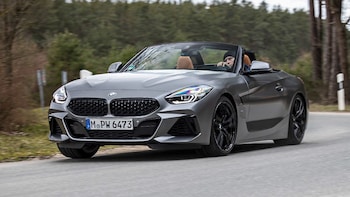 The fact that BMW is convinced of the sporty and emotional talent of its roadster can also be seen from the pricing. The entry into the Z4 world costs at least 42,900 euros, the top model starts at 63,100 euros. Fortunately, there is currently a substantial discount on the BMW Z4. At carwow.de there is the Bavarian roadster with a maximum discount of up to 10,412 euros (As of November 28, 2021).

If you are looking for the maximum discount and the greatest possible driving pleasure, you cannot ignore the M Performance model. At carwow.de there is a discount of up to 10,412 euros for the BMW Z4 M40i. The prices for the 340 hp flagship of the series start at 53,403 euros, which is 9697 euros or 15 percent below the recommended retail price. In return, you not only get what is probably the best engine in the Z4, a three-liter in-line six-cylinder, but also lots of sporty details as standard. In addition to the M aerodynamics package, the M40i also includes an M sport brake, adaptive suspension and a sport differential as standard. In the interior, you can enjoy the uninterrupted view of the sky from M sports seats with covers made of leather and Alcantara. Of course, the seat heating shouldn’t be missing either. If the roadster is given optional extras such as the innovation package or a special paint finish, then carwow.de offers a discount of up to 10,412 euros. But the basic version of the Z4, the Advantage model, should also be of interest to bargain hunters. Even the 197 hp Z4 sDrive20i with a two-liter turbo gasoline engine is available from carwow.de from 36,854 euros without any extras – and thus around 6000 euros cheaper than indicated in the price list. So it doesn’t really matter that the transfer costs reduce the discount for all versions by a few hundred euros.

How to use Windows’s native SSH client

European Silk Road | What does the Empire own? | And stinging soldiers