Facebook Twitter LinkedIn Tumblr Pinterest Reddit VKontakte Odnoklassniki Pocket
When it comes to the question of the drive system of the future, there are no two opinions at Audi: The Ingolstadt-based company has tailored its strategy entirely to electric. What began with the Audi e-tron has already found some imitators, including the Q4 e-tron and the somewhat more stylish offshoot Audi Q4 Sportback e-tron. With a length of 4.59 meters and the roofline sloping backwards like a coupé, the fully electric SUV is something like the little brother of the e-tron Sportback. The chic Stromer is currently available in three output levels between 125 and 220 kW, the top model Q4 Sportback e-tron 50 quattro, as the type designation suggests, is equipped with all-wheel drive as standard. The chic design is granted to all model variants. However, this also has its price. You have to put at least 43,900 euros on the table if you want to drive up silently in Ingolstadt. Fortunately, this is also cheaper: With the provider carwow.de you can currently save up to 13,939 euros when buying the SUV coupé (As of October 17, 2021). The purchase premium for electric cars is already included here. 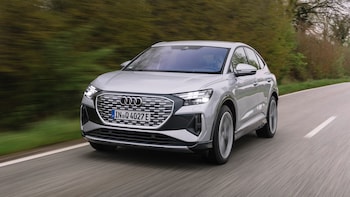 What is particularly pleasing about this is that it has the maximum discount already with the entry-level version Audi Q4 Sportback e-tron 35 gives. The term entry-level version is perhaps a little misplaced here. The 125 kW engine from Ingolstadt not only has a range of up to 341 kilometers (WLTP) suitable for everyday use and accelerates to 100 km / h in 9 seconds, it also rolls off the assembly line with a decent set of basic equipment. LED headlights are just as much part of the standard equipment of the Audi as a DAB tuner and a multifunction steering wheel. At carwow.de, the Q4 Sportback e-tron 35 is available from 30,911 euros, which is 12,989 euros below the recommended retail price. If you book a few extras and packages, the already mentioned 13,939 euros discount is included with the full-time electrician. The environmental bonus is already taken into account here. (Attention: the transfer costs reduce the discount by a few hundred euros).

For many sworn fans of the brand, an Audi without quattro all-wheel drive is sacrilege. It’s good that carwow.de also offers lavish discounts on the top model Q4 Sportback e-tron 50 quattro equipped with all-wheel drive. And there are many other reasons for choosing the powerful electric Q4. The electric drive of the Ingolstadt-based driver has an impressive 220 kW output, and the battery pack with a capacity of 82 kWh enables a range of up to 488 kilometers without stopping at the charging station. The 50 quattro masters the sprint to country road speed in 6.2 seconds, 2.8 seconds faster than the base model. For these values, however, Audi calls a base price of 55,600 euros. At carwow.de the currently most powerful Q4 Sportback e-tron is available from 43,042 euros and thus 12,558 euros below the list price. The environmental bonus is already included in this model and the transfer costs reduce the discount by a few hundred euros in the end. (Here are important tips for buying a new car on the Internet!)

Word: How to highlight table cells in text documents

Saving data securely in the cloud: Tips for Cryptsync