Facebook Twitter LinkedIn Tumblr Pinterest Reddit VKontakte Odnoklassniki Pocket
The introduction of the first mocha around nine years ago was a blessing for Opel. Both financially and in terms of marketing. Because the compact SUV quickly developed into an absolute bestseller and finally guaranteed black numbers again after many years of crisis. The situation of the traditional brand was not quite as dramatic before the start of the second mocha generation, as Opel is now integrated into the Stellantis Group and already recorded solid sales figures in the PSA years. 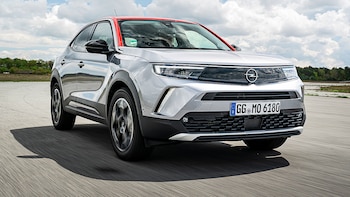 Nevertheless, the now much more stylish mocha is likely to generate increasing sales again. For the first time, the compact SUV with the new Vizor front design is also available as a purely electric Mokka-E version. But Opel also has matching mocha versions in its range for fans of conventional drives. According to the list, these start at just under 20,000 euros. If that’s a little too much for you, you can save a lot at the moment. At carwow.de there is the second generation of mochas with savings of more than 7,000 euros (As of November 7, 2021). (Important tips for buying a new car on the Internet!)
When ordering the Mokka, buyers (apart from the electric model) can choose between a diesel with 110 hp and a turbo gasoline engine with either 100 or 130 hp. There are a little more options when it comes to equipment. Opel has given the Mokka five versions, from the basic version called “Mokka” to the “Ultimate”. And as is so often the case with carwow.de, the latter, i.e. the Mocha with the most expensive equipment variant, is the model with the greatest discount. Likewise, one should not make any compromises when choosing the engine and choose the more powerful gasoline engine in conjunction with the automatic transmission.

If you opt for the Mokka 1.2 Direct Injection Turbo Ultimate, nothing to be desired in terms of standard equipment. From the reversing camera and Alcantara seat covers to the Navi Pro navigation system with 10-inch touchscreen, everything is on board that sweetens everyday automotive life. Even matrix LED headlights are included at no extra charge. Opel calls you for this relatively high list price of 32,765 euros on. but at carwow.de the top version with the most powerful engine is available from 26,124 euros. This saves at least 6641 euros compared to the RRP. With a few extras such as leather upholstery or the “Park & ​​Go Premium” package, a discount of a maximum of 7536 euros is included (note: the transport costs can reduce the discount by a few hundred euros).

20 percent discount on the basic mocha

But at the other end of the mocha price list you can also save a lot of money via carwow.de. The entry-level model called “Mokka” with a 100 hp petrol engine, manual transmission and, compared to the Ultimate, more manageable basic equipment costs 19,990 euros according to the list. There are 16-inch steel rims, black fabric seats and at least LED headlights as well as the modern design. If that’s enough for you, you can lower the price recommendation from Opel by another 4099 euros. At carwow.de, offers for the basic mocha start at 15,891 euros. That corresponds to a discount of over 20 percentwithout negotiating at the dealership. (Attention: Here, too, the transfer costs can reduce the discount by a few hundred euros) (Calculate maintenance? To compare car insurance!)

Charging stations for e-cars: a large comparison of search apps