Facebook Twitter LinkedIn Tumblr Pinterest Reddit VKontakte Odnoklassniki Pocket
This is probably not how those responsible at BMW have imagined the result of the collaboration with Toyota. Because while the convertible BMW Z4 was at least visually offensive here and there, the Toyota Coupé GR Supra earned nothing but praise and was much more in demand than the technically identical BMW half-brother. If you look closely at the successful lines of the Supra, it is also difficult to find reasons for criticism. The same applies to the drive. Thanks to the BMW influence, the sporty Japanese relies on rear-wheel drive and powerful turbo gasoline engines in conjunction with an eight-speed automatic from ZF. The Toyota GR (GAZOO Racing) Supra in its most powerful version with 340 hp from an in-line six-cylinder petrol engine caused a lot of stir. Thanks to this power output, the 1.6-tonne coupé accelerates from zero to 100 km / h in just 4.3 seconds. No other production Toyota in Europe can do that. However, this performance also has its price. You have to put around 49,000 euros on the table for the basic model, the six-cylinder version costs at least 62,900 euros according to the list. But that can also be done cheaper. At carwow.de the Toyota GR Supra is currently available at a discount of up to 8,372 euros (As of October 24, 2021). 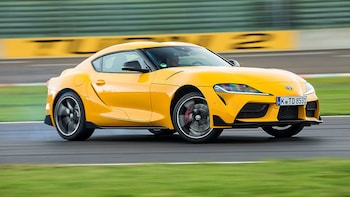 On the way to a chic Toyota sports car, interested parties have a crucial choice: four or six cylinders? While the top model comes up with three liters of displacement and an output of 340 hp, the somewhat tamer Supra variant drives with a two-liter turbo four-cylinder with 258 hp. Not least thanks to the lower weight, the somewhat weaker Toyota can also convince. The lower purchase price also speaks clearly in favor of the two-liter variant. At carwow.de, the offers for the 258 hp Japanese with Bavarian technology start at 43,293 euros, which is 5607 euros below the list price. The limited edition Fuji Speedway, which is also available, saves at least 6517 euros. If you want both maximum performance and the full discount, you cannot ignore the six-cylinder. Instead of the at least 62,900 euros, carwow.de calls for 55,473 euros for entry into the six-cylinder version. That corresponds to a saving of 7427 euros. The full 8372 euro discount is on the Toyota GR Supra in the also limit Jamara Racetrack Edition possible. The carwow offers are particularly interesting, as the coveted Supra can currently only be configured in the four-cylinder version on the Toyota website. You can also cope with the fact that the transfer costs reduce the discount by a few hundred euros for both variants. (Here you can find all information about buying a new car on the Internet!)

Backup in the network with Windows 11 on-board tools