Premiere and market launch: at the end of January 2022, Skoda will pull the cloth off the coupé

Skoda is building a coupe version of the Enyaq. Now the Czechs have published a teaser picture showing the silhouette and reveal when they want to introduce the VW ID.5 brother: The SUV will celebrate its premiere on January 31, 2022. A short time later, the first models could roll out to dealers. 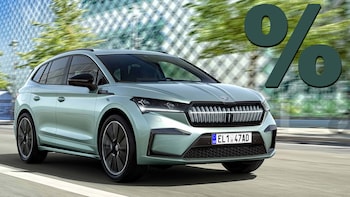 Buy Skoda Enyaq at a discount at carwow.de

At carwow.de there are inexpensive new cars, including many Skoda models such as the Enyaq.

It is already official that the Enyaq Coupé will have a better drag coefficient compared to its platform brothers Audi Q4 e-tron Sportback and VW ID.5. While the colleagues from Wolfsburg and Ingolstadt come to 0.26, the Skoda reaches 0.234 – that should have a positive effect on the range. The WLTP range of the regular Enyaq is up to 541 kilometers, depending on the drive and battery. The versions with a large battery will also have a sloping roofline, i.e. the 204 hp powerful Enyaq Coupé iV 80 with 77 kWh of electricity in the stomach or the one also available in the coupé body All-wheel drive version 80x with extra motor on the front axle and up to 265 hp. The 60s model will also be in the showroom, with a 58 kWh battery and 180 hp. The Czechs do without the entry-level model iV 50 with reduced performance and electricity storage capacity, from the Sport version RS there is still no talk that it will be submitted later, but it is not unlikely.

Design and interior: Despite the coupé rear, the trunk only shrinks minimally

While the Enyaq has so far been driving up as a well-behaved high seat, which has a few rough edges in the sheet metal cladding, but otherwise offers hardly any friction surface, the flattened coupé rear polarizes significantly more – and without major restrictions: The trunk shrinks minimally from 585 to 570 liters when trying to sit in the prototype, two adults could confidently sit in a row. Otherwise everything is the same. If you get in at the front, you will find yourself in the well-known Enyaq cockpit again, with small instruments, a large infotainment screen and a tidy center console. The glass roof is standard on the Coupé, the rest depends on the budget.

So the coupe version of the Skoda Enyaq could come

Driving: No surprises on the first drive in the prototype

The drive in the prototype did not provide any surprises, the SUV coupé flows good-naturedly, thanks to the more than two tons of weight fed up on the street – and like its conventional brothers, does not fall through exaggerated Liveliness on. But it doesn’t have to be, the sloping rear ensures that.

New prices and rules: That will change for drivers in 2022