Presentation and price: Skoda Karoq starts at a good 25,000 euros

Would you have recognized it? What you see here is the Karoq facelift – and even fans have to look twice to see the innovations. After four years of construction and a tiny refreshment for the 2021 model year, Skoda is treating the bestseller to another update. 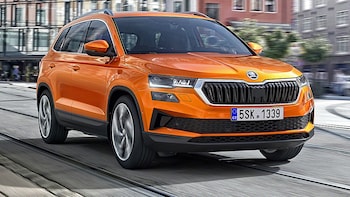 Buy Skoda Karoq at a discount

At carwow.de there are new cars with generous discounts, including the Skoda Karoq.

With over 500,000 units sold worldwide, the Karoq is not only the Czech company’s best-selling SUV model, it was also the second most successful series after the Octavia.
Skoda offers the Karoq with three petrol engines and two diesel units. A one-liter petrol engine with 110 hp makes the entry, the base price is 25,290 euros. The top petrol engine is a two-liter four-cylinder with 190 hp, which is reserved for the “Sportline” equipment line. If you want to call it your own, you have to put at least 41,870 euros on the table.
The diesels are a two-liter four-cylinder with 115 hp and 150 hp. The smaller diesel costs at least 31,020 euros, the larger costs from 33,330 euros. The engines come with a manual transmission as standard, and a seven-speed DSG is available for an extra charge of 2,000 euros. And if it is to be all-wheel drive, then an additional 4400 euros will be charged.

The prices at a glance:

Appearance and dimensions: Karoq facelift can only be recognized at second glance

The facelift of the Skoda Karoq is visually more than decent. The biggest changes are at the front. The wider, now hexagonal radiator grille features vertical double ribs. Adjacent there are new, narrower headlights for the Karoq (on request for the first time with matrix LED technology).

The air intake below the license plate has also been redesigned and ends in implied air curtains. The Cd value is 0.30, because Skoda was able to reduce air resistance by nine percent with the facelift. The roof edge spoiler painted in the vehicle color and the new rims with aero inserts (17 to 19 inches) also play a part in this.

Apart from smaller rear lights, which are full LED as standard and are equipped with dynamic indicators from the “Ambition” equipment line, a new insert in the rear apron and the two fresh exterior colors “Phoenix Orange” (known from the new Fabia) and “Graphite Gray”. “There are no optical innovations. With a length of 4.39 meters (+ 1 cm) and a width of 1.84 meters, the dimensions remain almost unchanged.

The wheelbase is 2.64 meters (2.63 meters for the all-wheel drive versions) and the trunk volume is 521 to a maximum of 1630 liters. With the well-known Varioflex seats, the storage space increases to between 588 and 1605 liters (rear seats folded down) or 1810 liters with the seats removed.

Dimensions of the Skoda Karoq facelift:

Driving: On the Road with the Karoq Sportsline (Update!)

In terms of looks, not much has changed since the facelift of the Karoq. But how is it on the street? How To Cars grabbed the SUV for testing. There is no big surprise when it comes to the engine either – the test car with the “Sportline” equipment has a two-liter four-cylinder turbo with 190 hp, four-wheel drive is standard on board.

When driving, it is noticeable that the engine and transmission are quite well matched to each other. The 320 Nm strong 2.0 TSI presses pleasantly at low speed, making some gear changes superfluous. The seven-speed DSG masters smooth starting just as well as snappy downshifts. The simulated exhaust hum is still annoying, but it can be switched off.

In its class, the Karoq is one of the particularly well-tuned SUVs, and luckily the Sportline is no different. Even in the tightly tuned setting, the DCC presents itself from its flexible side in combination with the 19-inch wheels; in soft mode, even bad roads are no longer a problem.

Small point of criticism: From the central position, the steering reacts a bit too sharply, on the freeway the Karoq sometimes feels high-legged and jittery. On the other hand, the steering wheel, which is already known from the Octavia, is chic. So if you like a separate climate control unit with rotary controls and buttons for the seat heating, you will be happy here.

However, a little more change would be desirable for voice control: the navigation destinations have to be dictated in a rigid sequence, and climate requests are not in the repertoire of voice control at all.

There is at least one small surprise in the interior: the Karoq is no longer offered with analogue instruments. Instead, the Virtual Cockpit is now standard. The digital instruments are available in two versions (8 and 10.25 inches). There is also a choice of four infotainment systems with screen sizes from 6.5 (Swing) to 9.2 inches (Columbus). A new feature is the optional eco-package with vegan seat covers that hardly differ in feel from other imitation leathers, but are made from recycled PET bottles. Parts of the seats and the armrests are also made of microfibre Suedia in the color “mocha brown”. The LED ambient lighting was extended to the rear and that’s it, nothing more has happened in the interior of the facelift.

The equipment variants are “Active”, “Ambition” and “Style”. The optically rustic Karoq Scout is being dropped from the program due to insufficient demand, the top model “Sportline” is still available. The 190 hp two-liter petrol engine (always with all-wheel drive and DSG) is offered exclusively in the Sportline.

No plug-in hybrid for the Karoq

Anyone hoping for the plug-in hybrid of the Octavia iV will be disappointed, the Karoq will continue to be only available as a combustion engine from 2022. When asked, Skoda explains that they are instead concentrating on developing new electric models. Too bad, because the plug-in hybrid would have rounded off the range of engines.