Facebook Twitter LinkedIn Tumblr Pinterest Reddit VKontakte Odnoklassniki Pocket
The subsidy for plug-in hybrid cars will expire at the end of 2022. So it’s high time to choose and buy the right hybrid model. And as the Peugeot 508 SW shows, there are not only SUVs that roll off the assembly line with both a combustion engine and an electric unit under the body: As the so-called hybrid 225 e-EAT8, the French station wagon gets a system output of 225 hp from the electrified one Drive train, the top model Hybrid4 360 e-EAT8 even provides 360 horses from a total of three engines, which gives it its name. 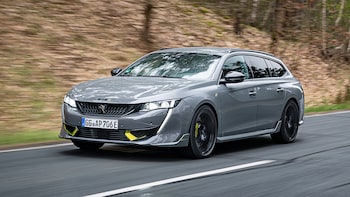 Peugeot 508 SW at a discount

In order to get the maximum discount, you often have to grab the top model of a series at carwow.de. This also applies to the Peugeot station wagon. As the 508 SW Hybrid4 360 e-EAT8 PSE, the driver of the plug-in hybrid model can not only look forward to 360 hp and all-wheel drive thanks to the electric motor on the rear axle, the equipment of the sporty station wagon is also impressive: The station wagon has features such as an adaptive chassis, 360-degree camera, five driving modes, full LED headlights and comfort seats with massage function at no extra charge.

Added to this is the sporty appearance of the station wagon with the addition “Peugeot Sport Engineered”. According to the list, the combination of plug-in hybrid and sporty trim costs at least 68,450 euros for the 508 SW. At carwow.de, prices start at 53,906 euros. This corresponds to a discount of 14,544 euros or around 21 percent.
The purchase premium for plug-in hybrids is already taken into account here. For the maximum discount of up to 15,463 euros, you still have to equip the 508 SW with a few extras that are subject to a surcharge, such as the panoramic glass roof (note, the transfer costs reduce the discount by a few hundred euros).

Spacious and cheap diesel as a combustion engine alternative

If you don’t have access to a socket, it might be worth turning to diesel. Luckily, carwow.de also has the BlueHDi 130 with 131 hp and a torque of 300 Newton meters well below the recommended retail price – regardless of the equipment.
If you are looking for a healthy mix of comfort and purchase price, you should take a closer look at the 508 SW Allure Pack, for example. In this version, the station wagon comes standard with a navigation system, 17-inch alloy wheels, full LED headlights and dual-zone automatic climate control. The eight-speed automatic transmission is also included at no extra charge. The interaction of diesel and automatic manages to produce a combined standard consumption of 4.7 liters (WLTP). This should be an unbeatable argument, especially for frequent drivers.

As a rule, Peugeot calls for at least 45,250 euros for the 508 SW BlueHDi 130 Allure Pack. At carwow.de, prices for the well-equipped diesel station wagon start at EUR 38,497, which is EUR 6,753 below the recommended retail price. In view of this discount, the transfer costs of a few hundred euros are not a problem.

PCWELT Easter campaign 2022: We are giving away a data recovery tool