Facebook Twitter LinkedIn Tumblr Pinterest Reddit VKontakte Odnoklassniki Pocket
The first photos and details of the new Mitsubishi Outlander have already arrived in Europe, and it will be some time before the latest model generation is launched. But that’s not a problem, after all, the current Outlander has a lot to offer and is one of the most popular and best-selling plug-in hybrid SUVs in Europe. The combination of a relatively high electric range (approx. 57 km in town), a lot of space in the interior and a comparatively low purchase price has given the Japanese a growing fan base. According to the price list, Mitsubishi calls for at least 39,990 euros for the plug-in SUV, but that is only a theoretical value. Because carwow.de is currently offering substantial discounts: the Mitsubishi Outlander is offered up to 13,765 euros below the recommended retail price (As of November 28, 2021). The purchase premium for electric cars and plug-in hybrids is already included. (Here you can find all information about buying a new car on the Internet!) 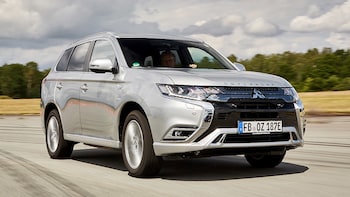 When ordering your dream Outlander, you can choose from a total of five variants at carwow.de. But regardless of whether it is the basic version or the highest equipment “top”, Mitsubishi always equips the SUV with the same technical equipment. A 2.4-liter four-cylinder petrol engine and two electric motors supply the Outlander plug-in hybrid with a system output of 224 hp, thanks to the positioning of the electric motors, the model is equipped with all-wheel drive. Even the entry-level model has features such as heated seats, 18-inch alloy wheels and a rear-view camera. However, if you are looking for the highest discount, you have to go for the second-highest model “Plus with Spirit Package” at carwow.de. Instead of the list price of 47,490 euros, prices on carwow.de start at 34,415 euros. If you order a few extras in addition to the highlights already included, such as bi-LED headlights and leather seats, you can increase the savings to said 13,765 euros (be careful, the transfer costs reduce the discount by a few hundred euros).

Entry-level version with a discount of over 11,000 euros

A high price is often a guarantee for high discounts. Nevertheless, you can save a lot of money at carwow.de even with the basic version of the Mitsubishi Outlander PHEV. At least 11,713 euros to be precise. Because instead of the 39,990 euros RRP called by the Japanese, carwow.de only charges 28,277 euros. Thanks to the environmental bonus and discount, you save a fantastic 29 percent of the purchase price. A value that you would probably never achieve in normal negotiations in a showroom.