Facebook Twitter LinkedIn Tumblr Pinterest Reddit VKontakte Odnoklassniki Pocket
Suzuki presents the new S-Cross: new front, new rear, partly new cockpit – We spontaneously think of a facelift of the SX4 from 2013. But Suzuki says: “Except for the roof, all body parts are new, we see it as a new car with fresh technology.” 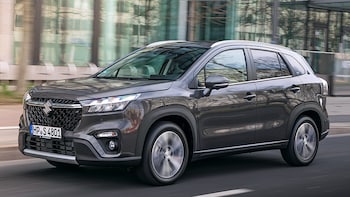 Get the best offers for the Suzuki S-Cross Hybrid and save up to €4151 compared to the RRP at carwow.de.

Well, let’s test that out. The one with the engine would be clarified quickly: There is only one! Otherwise, the price list is processed in a flash. 4WD or not 4WDsix-speed manual transmission or just as many gears as an automatic, two equipment variants, eight colors, done.

Let’s get in, first seat test in the back. And a first shock: the head hits the roof! 1.80 meters are not exactly much for an AUTO BILD man, but our S-Cross has an electric glass roof in the Comfort+ equipment, which costs height. They have refreshed the cockpit, large navigation screen like a tablet and at eye level, everything is easy to operate even while driving.

The prices are quite high

But all the hard plastic has remained, and there isn’t a large one that fits in the compartment under the climate controls smart phone And it’s certainly not charged inductively, and instead of a carpet, they chose felt as the carpeting, which somehow doesn’t match the price. After all, our test car is in the list as a 129 hp mild hybrid with all-wheel drive, automatic and metallic paint for 36,040 euros, for the base with Front wheel drive and manual transmissionwithout panoramic roof and GPSthey want 29,290 euros.

And you want to know: is it worth the money? Well, the starting behavior was already good. The 1.4 turbo petrol engine has a 48-volt system with an integrated starter-generator that acts as the 14th hp powerful electric motor supports starting and accelerating. And so goes the little one SUV evenly forward, you feel sufficiently motorized. This has a harmonious effect and promotes relaxed cruising, because the chassis and steering don’t want more either.

Finally, we briefly turned the wheel in the speedometer (also such a quirk) and we read in the on-board computer: 7.3 liters Freeway, 6.9 city. Incidentally, the choice of engine will soon change: Suzuki is planning a full hybrid.