Facebook Twitter LinkedIn Tumblr Pinterest Reddit VKontakte Odnoklassniki Pocket
When Tesla announces a new car, the fans go crazy. The automaker around company boss Elon Musk is doing in the automotive sector what Apple once did with the iPod and iPhone – to trigger a real hype. The latest model is the Model Y in the Tesla portfolio. The SUV is based on the Model 3 and thus forms the little brother of the Model X.

The most important information about the Tesla Model Y at a glance:

● Model Y will in future be built in Grünheide
● Prices start at 59,965 euros
● Optional with seven seats● Up to 507 kilometers range

Delivery and price: Five Model Ys have already been built in Grünheide

The first Model Y were delivered in Germany in August 2021. In the future, however, the cars will no longer come from China, but from the new Gigafactory in Grünheide near Berlin. The start of production in Brandenburg, which was actually planned for July, has been delayed because important permits were missing. The last approval from the State Office for the Environment in Brandenburg is to be given in early December, reports the Automobilwoche. Then nothing stands in the way of production. The first five cars have already been manufactured here. Starting in January, Tesla wants to start producing 1,000 units a week. Later, the number is increased until the plant spits out 500,000 units a year. The first copies from Grünheide could then be delivered in 2022. The Model Y is offered in two versions (a range-optimized variant and a variant designed for performance). The SUV starts at 59,965 euros. If you want to have full power, you have to put at least 66,965 euros on the table. However, the environmental premium is still deducted from both prices.

Leasing: The first offers have already been made

Even if the new Tesla Model Y is almost fresh on the market, there are already the first leasing offers. At sparneuwagen.de (cooperation partner of AUTO BILD) the Model Y with a range of 507 kilometers was most recently available in private leasing for 449 euros net per month and a term of 24 months. Usually are 10,000 free kilometers inside, larger kilometer packages are available at an additional cost. As usual with electric cars, one has to Special payment equal to the environmental premium be done. The amount will be fully reimbursed after the application for funding has been submitted to the Federal Office of Economics and Export Control (BAFA); Model Y is around 5000 euros.

The dimensions at a glance

AUTO BILD editor Hauke ​​Schrieber has already driven the Tesla Model Y in the US when Dual mode with all-wheel drive: “I’ve been a couple of times Model 3 drove, Model Y can’t surprise me. The technology is the same. But even before the departure, the dimensions become clear: At 4.75 meters, the crossover is six centimeters longer, seven centimeters wider and above all 18 centimeters higher than the model 3. You can tell the difference by the huge storage space in the back (even a third row of seats for two is possible), but especially on the back seat. Suddenly I (1.92 meters) real space above the head to the huge panorama roof.
One thing can be said about driving: It couldn’t be easier. If you are attentive it seems impossible to have an accident with your carbecause cameras and sensors also take care of you. The acceleration is well known, although it doesn’t seem quite as blatant without a performance package. the Roughness of the chassis on the other hand, surprised on the bad US roads. As far as the range is concerned, the promised 507 kilometers should not be achieved in practice, although a new software version has made the Tesla more efficient. Oh, and because there are always complaints about Material and workmanship gives: Our rental car (not a press car) had gap dimensions that were free of complaints and showed no major signs of wear even after 18,000 kilometers. “(Click here for the detailed driving report)

Range and drive: Up to 507 kilometers according to WLTP are possible

Two versions of the Model Y is offered by Tesla in this country, currently both with all-wheel drive and up to seven seats. The model with “maximum range“, that delivers 378 kW (514 PS). Tesla gives a range of up to 507 kilometers according to WLTP at. The sprint from zero to one hundred takes five seconds and ends at 217 km / h. If the maximum performance of Model Y is to be called up, the “Performance “model with 393 kW (534 PS) to choose from. 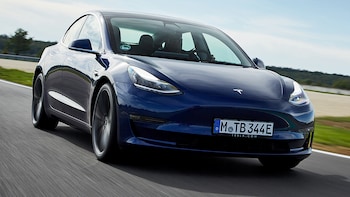 It sprints from standstill to country road speed in 3.7 seconds, and the top speed is 250 km / h. Here the range shrinks 480 kilometre, however, this value has only been estimated so far. Later there will be an entry-level version with rear-wheel drive and 255 kW (347 PS). Unlike previous Tesla models, the Americans offer a heat pump for the Model Y. It improves the range, especially in winter.

The Netherlands blunders in remittance to the EU, noose of 170 million possible

Opec meets | Shampoo without bottle | And what about Tony's Chocolony?