Facebook Twitter LinkedIn Tumblr Pinterest Reddit VKontakte Odnoklassniki Pocket
It has long been known that e-cars are quiet. But it was new to us that they also keep people calm as soon as they appear. In fact, the Czech construction workers immediately ignored motor hammers, excavators and shovels when we rolled into the large parking lot with the new Skoda Enyaq Coupé. 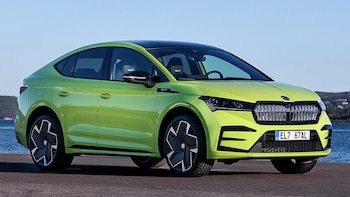 Get the best offers for the Skoda Enyaq Coupé RS iV and save up to €9706 compared to the RRP at carwow.de.

Sure, the poisonous mamba green enhances the effect. But even so, the noble offshoot of Skoda’s large electric car is striking. Compared to the classic Enyaq, the dome-shaped roof slopes down sharply towards the rear, creating visual dynamism; this is also underpinned by the redesigned front apron. Anyone who fears that the sportiness will be at the expense of the guests will be surprised when they enter the spacious interior.
Up to five passengers enjoy ample head, leg and shoulder room under the standard panoramic roof. Or loosely based on ex-VW boss Winterkorn: Nothing tweaks! Only when entering the rear does the flat roofline take its toll – whining at a high level. The trunk holds 570 liters when the bench is stationary – just 15 less than the normal Enyaq. With the seats folded down, 1610 liters are missing, a full 100 liters.

The saving qualities have been improved. The optimized aerodynamics give it the excellent drag coefficient of 0.234. Depending on the power level, the range should increase by 10 to 15 kilometers, with a maximum of 545 kilometers according to Skoda. The charging speeds could be increased by means of optimized programming to 120 kW for the 62 kWh battery and even to 135 kW for the 82 kWh variant. The 50 kWh entry-level version is not available for the Coupé.

In the RS push 299 hp properly

We drive the top model RS. Two electric motors balance 299 hp on both axles, propel the 2.25 tonne strand effortlessly to 100 km/h in 6.5 seconds. The fun is slowed down as before at 180 km/h. But the Enyaq Coupé scores above all as a relaxed glider anyway. The cockpit is tidy, operation is largely intuitive. Despite the slight lowering of the RS (15/10 millimeters front/rear), driving comfort is high, steering and drive work harmoniously.
The revised head-up display is new and provides excellent information with a standard 13-inch screen. Only the very small instrument display and the rather simple design deserve criticism. The Enyaq clearly sets itself apart from its group brothers VW ID.3 and ID.4. What he has in common with them is their shaky ability to deliver. Even before the Ukraine war, Skoda’s order books were full to the brim, and the waiting time was long. Since cable harnesses can no longer be delivered from the Ukraine, the only way to tell about delivery times is by crystal ball.

The RS can be ordered now at prices starting at 57,700 euros. The better-behaved versions iV 60, iV 80 and iV 80x are expected to follow in the middle of the year. Although Skoda is still silent on the prices, behind closed doors there are rumors of a base price of around 44,000 euros. One can only hope that production will pick up speed again as quickly as the Czech workers in the parking lot.

Russia wants to bring stranded US astronauts to Earth