Facebook Twitter LinkedIn Tumblr Pinterest Reddit VKontakte Odnoklassniki Pocket
the Peugeot 308 has a mission with its new edition: To capture important market shares and thereby stir up the compact segment. Visually, the French dares a lot to meet this demand and the car with the lion in the grill was also able to do well in the first tests at AUTO BILD. But what about connectivity? How well is the Peugeot networked and does the infotainment do what it should? The first connectivity check should find out. AUTO BILD shows what is already going well and where the French should refine.

Basic structure of the 308 infotainment

Peugeot’s new infotainment system always consists of a 10-inch, fully digital instrument cluster and a 10-inch touchscreen in the center console. Thanks to the integrated SIM card, the vehicle is always online. For media control, the driver receives a new multifunction steering wheel that now has toggle buttons instead of the previous rollers.
From the “GT” equipment line is a 3D cockpit series. A depth effect can be created here if desired, but this has no influence on the rest of the display’s function. Wireless Apple CarPlay and Android Auto are always on board, and from the “Allure Pack” version, an inductive charging cradle is also part of the standard equipment. The prices of the Peugeot 308 start at 23,700 euros, the Allure and GT equipment start at 28,250 and 33,550 euros, respectively. 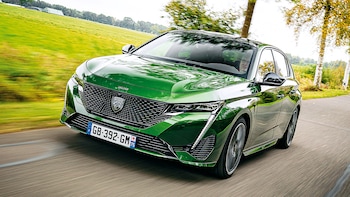 Buy Peugeot 308 at a discount at carwow.de

At carwow.de there are inexpensive new cars, including many Peugeot models such as the 308.

That’s what pleases the new Peugeot 308

Peugeot’s infotainment has been going by the name for a while “i-Connect “. The latest generation is used for the first time in the 308 and it has one high degree of customization on. Unlike before, there is now a homescreen that can have multiple pages if desired and is freely configurable.

The same applies to the instrument cluster. Here, too, there are tons of possibilities to display exactly the information that you need. Smart: If you want to get to the list of all available applications, simply tap the screen with three fingers. The look is tidy and chic in almost every combination.

Starting with the “Allure” equipment, Peugeot delivers every 308 with the so-called “i-Toggels” out. This is an additional touch screen below the main screen, the six different ones Quick selection areas maps. Five of them are freely configurable and can not only be assigned with large menu items, but can also be used for quick navigation to work or home. In practice, operating the system via the touch surfaces is fun and always reliable. The screen replaces the usual piano keys and is more than superior to them due to the free assignment. With the i-Toggels, Peugeot clearly stands out from the competition, which suits the brand well.

The 3D cockpit was already introduced with the smaller 208 and is finding its way into the compact segment at Peugeot for the new generation of 308 models. The French offer it exclusively in the two top equipment “GT” and “GT-Pack”. The effect can be seen clearly and is not distracting. The additional depth in the display makes reading the instruments pleasant. The function does not have any serious use and can rather be dismissed as a gimmick. If you find the feature annoying, you can also deactivate it at the push of a button. Still, it’s nice to see such a feature in this class. Normally, such features are only reserved for higher vehicle classes; Mercedes, for example, only offers them in the S-Class (but here with a significantly higher level of technical complexity). Here too, Peugeot takes a special route, which lets the thumb wander up.

The wireless connection of the smartphone finds its way into the base of the 308. The phone can therefore remain in the pocket or handbag for short stretches, which brings with it a considerable gain in convenience. The function costs extra for many competitors and even then does not always run smoothly. Different in the Peugeot: The connection was always flawless in the test. The connection was also established quickly after starting the car, from time to time the infotainment system would ask for the phone to be dialed manually, but then connected without any problems. A prime example of wireless cell phone connectivity.

That is not what I like about the Peugeot 308

At last there is also natural voice control at Peugeot, which is activated on demand. With the activation phrase “Ok Peugeot”, the assistant is woken up as standard from the “Allure” line. In addition to navigation inputs, vehicle functions such as seat heating or air conditioning can also be operated.

Unfortunately, the system takes a significant amount of time to process the voice commands. The often missing voice feedback can also be frustrating in everyday life. Speech recognition only repeats the understood destination for navigation destinations; actions such as activating the seat heating, on the other hand, are only acknowledged by the technology with a message in the display. This distracts while driving and thus contradicts the purpose of voice control. Here Peugeot should improve again.

A Peugeot must also be something that is pleasing to the eye. What applies to the exterior is also reflected in the infotainment. The graphics look really good and every menu change is accompanied by an animation. Unfortunately, the technology here sometimes lacks the necessary computing power or the necessary RAM. The movements are sometimes jerky, which reduces the visual experience. This fact can be observed in the instrument cluster in a particularly disturbing manner. The virtual instrument needles move here only by leaps and bounds within the displayed tubes. That doesn’t match the otherwise very modern impression of the system. Hopefully an update will help here in the future.

The second level makes the system a bit complicated

With the 308, the individualization of the system is very important. However, this also means that some menu items are more difficult to reach. It often happens that you have to dive into a second level of the system. The menu structure could be made a little easier here. For example, the seat heating is hidden behind two to three steps (depending on whether the seat controls are stored in the i-Toggels or not), which requires a lot of unnecessary attention. Classic buttons or a certain gesture could help here.