The first big surprise in the 2020 tool box test: Tool boxes with a lot of content are often cheaper than basic equipment. Not only relatively, also absolutely. Best example: the luxury brand Hazet. The set with 47 parts costs just under 200 euros, the ratchet alone costs 55. Do tools have to be so expensive? Or is it also cheaper? AUTO BILD wanted to know exactly that and tested 14 socket wrench sets with a half-inch drive. By hook or by crook. 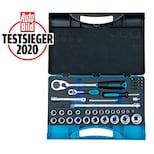 The test winner with the top mark “very good” was the tool set 953HP from manufacturer Hazet – with a price of almost 200 euros, it is also the second most expensive tool set in the test. However, the price pays off: You get tools of the highest quality and a high-quality high-end ratchet. It is a marvel of technology, has 90 teeth. Means: The return angle is only four degrees, good when screwing in tight spaces. Absolute top: 1000 Newton meters (Nm) load capacity. At least theoretically, with us the grip started to bend at 690 Nm. The standard requires only 512 Nm, target exceeded. The cheaper sets – even the price-performance winner – cannot keep up. In the test, the Hazet 953HP achieved 90 out of 100 points and was rated very good.

The test was carried out based on DIN 3122, carried out by AUTO BILD in cooperation with the specialist magazine “Auto Motor Accessory” (AMZ) and their tool expert Jens Meyer. No standardized and calibrated test devices were used, but commercially available tools such as a crane scale. The deviation is given as +/- one percent, the reading accuracy was one Newton – equivalent to about 100 grams.

With the help of a puller, we pulled exactly at right angles on an extension that was attached to the ratchet handle and measured to exactly one meter, so we calculated Newton times a meter. The square ratchet was inserted in a hole in a double T-beam that had been filed to size. For the grip pull test, on the other hand, the pull direction was in the grip line. And finally, all the handles with the rubbers down were bathed in super-plus petrol for eight hours, which has a particularly aggressive effect on plastics due to its high aromatic content.

The test results at a glance

The tool from Blackspur is at the lower end in terms of price and quality. Sure, for 13 euros you shouldn’t expect much. But at least a chrome plating that doesn’t flake off so sharply that you could shave with it. But how much do you really have to invest for useful tools? Answer: 30 euros for the 80-year-edition case from motorcycle mail-order company Louis. The bad news: The tool set was only available in spring 2020. A cheap alternative with the grade “good” in the test: The Proxxon 23000 tool case for around 65 euros.
The third box that was able to impress comes from the Matthies house brand JMP. Its content seems indestructible, the ratchet finished our self-made testing device. Professional quality for only 59 euros. On the other hand, we did not judge the quarter-inch sets and masses of bits supplied in many boxes. Nice extras, but we were concerned with the important half-inch content. Slightly undervalued: Wera. Their ingenious Zyklop ratchet, which can also be used like a screwdriver, only loses touch with the front seats because of its expansive head. Disappointing: the established brands Sonic, Proxxon, Stahlwille and KS-Tools, which drop many points because of their inferior ratchets.

The most spectacular failure was the breakage of the ratchet handle at KS-Tools, the debris from which literally flew around our ears. It was also surprising that the ratchet mechanism on the ratchet from the most expensive box – from Stahlwille – broke, albeit far beyond the standard requirements. The same thing happened to Tectake and Sotech tools as well, with Tectake failing like Stahlwille with a broken latch; Sotech, on the other hand, with a sheared off tooth of the ratchet wheel. The handles were slightly bent four times after the tests, but this had no effect on further use.

Theoretically, the same applies to Blackspur’s Chinese goods, but after the test they no longer fit in his suitcase. The size 13 nut also barely survived the torque test with 150 Nm, and its material began to flow. Problem on four products: Your grip started to crush. And the Matthies ratchet also caused damage: At 720 Nm, it began to twist our double T-beam, which was manufactured as an anchor for the ratchets – despite additional welded reinforcements.

Conclusion on the tool case test

The testers wouldn’t have bet on that: Although the limits of the norm were deliberately exceeded, there were relatively few breaks. Only three ratchets gave up before reaching the required 512 Nm, only one of them with a big bang. And: Good tools for price-conscious people are sometimes available for as little as 30 euros. However, real enthusiasts will not be satisfied with that, they miss the velvety action of a Hazet ratchet or the numerous adjustment options of a Wera Zyklop. The market serves both.