Facebook Twitter LinkedIn Tumblr Pinterest Reddit VKontakte Odnoklassniki Pocket
For the 2023 model year, Toyota is giving the Corolla a facelift – with a fresh look and revised drives. The compact bestseller is available in three different body styles: as a five-door, as a Touring Sports station wagon and as a sedan. However, this is not currently offered in Germany. In the second half of 2022, the Corolla Cross will be followed by an SUV variant of the compact. 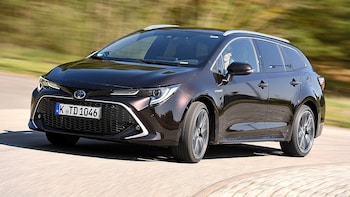 Toyota Corolla Touring Sports with a discount at carwow.de

At carwow.de there are many new cars with a discount, including the Toyota Corolla Touring Sports.

Visually, the front falls above all LED headlights up, which got a new lamp graphic. The slightly sharper radiator grille comes with a new pattern, and there will also be three new colors. The black roof and the hinted rear diffuser look a bit sportier, the exhaust trims, which were previously in chrome, disappear with the facelift.

Inside, the Corolla has a more modern look with new graphics and trim. Altered embossing patterns give the upholstery and surfaces a three-dimensional depth. The new 10.5-inch central display shows the user interface in high resolution, functions and upgrades can be installed via over-the-ari updates. New and improved assistance systems are designed to make driving even safer.

On the engine side, there will still be the 1.8 and 2.0 liter hybrid variants. But these are with the latest full hybrid technology from Toyota fitted. The Japanese promise more torque, more electrical power and greater efficiency.

Sales of the revised Corolla will start in 2022, and the first models will hit dealerships at the end of January 2023. Toyota is not revealing anything about the prices at the moment, it currently starts at 27,550 euros.

Switch to green electricity and secure Playstation 5 for 249 euros