Facebook Twitter LinkedIn Tumblr Pinterest Reddit VKontakte Odnoklassniki Pocket
The Transcend DrivePro 620 is a dual dash cam that films front and rear. However, it is less of a dual dashcam than two individual dash cams: Each camera has its own memory card and its own power supply, so they can also be used independently of one another. The price is impressive: around 180 euros are on the label. Overall, the dashcam does a good job in the test – the recordings are particularly impressive. If only it weren’t for a small mistake, which ultimately leads just short of the top grade to an overall grade of “good” with 40 out of 50 points. (For more information on the AUTO BILD test scenario, read our dashcam test with a list of the best.) 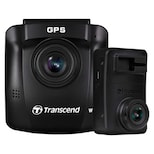 Service: First irritation when unpacking. There are three instructions included: one for the DrivePro 10, one for the DrivePro 250 and a quick start guide for the dual dash cam. Apparently, Transcend has brought together two proven products that are also available individually. The pairing of the two cameras is not done via a cable, as is usual with most dual dash cams, but via a WiFi connection – it works completely automatically. Operation also runs almost automatically. It is simple and intuitive. Great: There is a prominent button for manually locking a recording in an emergency. However, not every setting of the front camera is also adopted for the rear camera. For example, we wanted to turn off the microphone, but that didn’t work with the rear camera, it continued to record sound. Here you have to act with the DrivePro app: It can be connected to the two dashcams and then settings can be made and files managed on the smartphone. It works smoothly and without any problems.Evaluation of operation: 17 out of 20 points

Picture quality: In contrast to other dual dash cams, the Transcend DrivePro 620 does not have different image qualities: Both dash cams film in full HD (1080p), take 60 frames per second and have a wide angle of 140 degrees – you can see that permit. So you don’t have to make any compromises in terms of quality with the rear shots. The front camera does not give cause for complaint either in the day or in the night shots. Colors, sharpness and richness of detail can completely convince. In bright backlighting, the shadow areas are a bit dark, but that is to be tolerated. The night shots can also convince. It looks similar with the rear camera: The recordings hardly differ from those of the front camera. They are a little darker overall, but this can also be due to the position in the car. “Quality” rating: 17 out of 20 points

Safety: When it comes to safety, the DrivePro 620 has a whole list of assistance functions: lane departure warning system, collision warning system, speed alarm, HUD, headlight reminder and fatigue alarm can be activated on the front camera. There is also a parking mode which, thanks to the integrated battery, also works without a permanent power supply. However, the battery is rather weak, so that most recordings without power supply stop after a short time. However, the dual dashcam allows itself one faux pas: The communication between the two cameras is probably not working perfectly. Because some recordings that were manually blocked on the front camera are missing on the rear camera. In an emergency, this could overwrite evidence. “Safety” rating: 6 out of 10 points

Conclusion: Except for one error when blocking recordings from the rear camera, the Transcend dual dashcam runs flawlessly. It delivers high image quality both front and rear, is easy to use and offers added value through numerous assistance functions and an app. And at an absolutely fair price! And if you can do without the rear camera, you can buy the front camera (DrivePro 250) for just under 100 euros as an alternative.

Cars with combustion engines at the IAA 2021: These are our favorites