BMW M3 against Giulia QV: both with a lot of equipment, even more carbon and together 941 hp under 55,000 euros! Who has the better cards?

Dhe eternal BMW M3 is getting boring? Then how about an alternative, for example the Alfa Romeo Giulia Quadrifoglio Verde? Its Ferrari-born V6 makes almost 80 hp more than the in-line six in M3, not a bad argument. AUTO BILD each has a used copy of M3 and Giulia QV selected for comparison. Both cost just under 55,000 euros, ran little and seem to be mainly made of carbon. There are enough differences, however: where this M3 comes with a long list of extras, the Giulia is a fun case for racetracks and country roads. Which one turns on more?

To the M3 with top equipment

It starts with BMW M3. It dates from 2015, had two previous owners and has only run 14,000 kilometers. It is probably a former demonstration vehicle, which would also explain the unusually good equipment. This M3 namely offers extras that one would sometimes classify more highly. Seat heating in the rear, 360 degree camera, head-up display, Harman Kardon sound system, infotainment with online navigation and an electric rear window roller blind are on the list. Seats, door panels and the entire dashboard are clad in merino leather with contrasting stitching. Carbon trim and the anthracite-colored headlining continue to flatter the eye BMW Individual department. Not convinced yet? The BMW supports the driver with distance cruise control, traffic sign recognition as well as blind spot, high beam and lane departure warning. 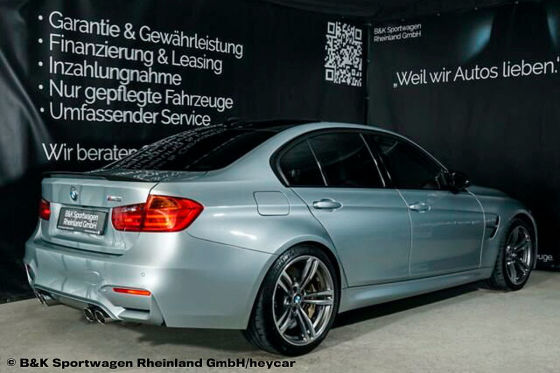 In addition to all the luxury, the Bavarian can of course also do sports. Its three-liter inline six-cylinder engine delivers 431 hp and 550 Nm. The gears are managed by a seven-speed DKG. The biturbo shoots the rear-wheel drive vehicle from 0 to 100 km / h in 4.1 seconds, thanks to the optional drivers package, 280 km / h are tops. An adaptive chassis and the optional ceramic brake hold the BMW on course. The rear lip, roof and cardan shafts are made of carbon. Of course, all of this was not for nothing. The original price of this M3 was more than 107,000 euros! After only 14,000 kilometers, it has now lost almost 50 percent of its value and is available for 54,900 euros from the dealer, including a guarantee. According to the dealer, the last inspection was already a year or 10,000 kilometers ago and should be carried out after the purchase to be on the safe side.

The Giulia QV looks even more aggressive. Especially the rear with the four sloping tailpipes and the oversized diffuser makes an impression. Where already? M3 not stingy with carbon, it works Giulia downright wasteful with it. In addition to the roof and bonnet, the rear and front lip, cardan shaft, drive shafts and the complete underbody paneling are also made from the lightweight material. But the engine is the key. The Ferrari-Stubby biturbo V6 presses a total of 510 hp and 600 Nm from a displacement of 2.9 liters. Particularly nice: Here you can switch by hand! The manual six-speed transmission was only ordered by five percent of all QV customers and completely disappeared from the QV program in 2018. The rear-wheel drive accelerates from 0 to 100 km / h in 3.9 seconds and can continue to run up to 307 km / h without electronic restraints. Again M3 sets the Alfa on an adaptive chassis, but the Brembo saddles only take punched steel discs in the pliers.

The Alfa is younger and cheaper 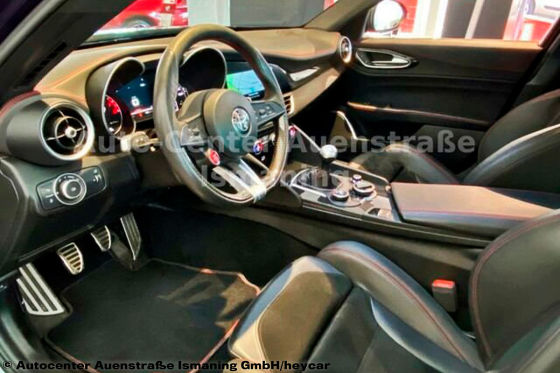 Manual switching was only rarely ordered from the QV and was removed from the program in 2018.

It also works without any comfort Alfa Not. The interior, furnished with leather, Alcantara and carbon, features online navigation, heated seats and a heated steering wheel. A reversing camera, high beam, blind spot and lane keeping assistant are also on board. The Giulia is two years younger than him M3 and run a moderate 21,830 kilometers. The only previous owner maintained the car according to the advertisement. The price tag says 53,940 euros, including fresh TÜV, guarantee and a set of new Pirelli rubbers.

Equipment and efficiency against emotion 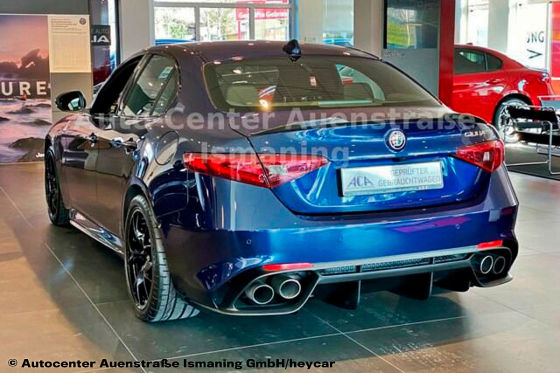 The blue paint looks good on the Giulia, especially in combination with the carbon accents.

Anyone in the financial position to spend 55,000 euros for a sporty mid-size sedan is spoiled for choice here. The M3 is much better equipped and runs a little less, despite less power, its driving performance is not much worse. He probably offers the more interesting price-performance ratio. The Giulia but is younger, a little cheaper, and there is no way around it in terms of emotions anyway. Not that the BMW leaves you cold, but optics, manual transmission and engine speak for the Italian in this regard. There are other used BMW M3 and Alfa Romeo Giulia with a guarantee!

Bestsellers: The best and most popular SSDs on Amazon

Final Fantasy 7 remake in the test: Risky game with the fans