Facebook Twitter LinkedIn Tumblr Pinterest Reddit VKontakte Odnoklassniki Pocket
After the surprising success of the first SUV coupé, the X6, BMW stepped up in 2014 and wanted to apply the recipe for success in a class below that. However, the first BMW X4 was not a real bestseller, perhaps because the exterior took some getting used to. The current version of the X4 with the internal code G02 looks much more consistent. The recent modernization measures should also help the X4 to increase its fan base. In addition to gentle modifications to the outer skin of the SUV coupé and a few updates in terms of infotainment, something has happened under the hood in particular. While only the diesel versions were previously equipped with the 48-volt mild hybrid system, the gasoline-powered models are now also being launched with soft electrification. With one exception: The X4 M Competition dispenses with this measure, but gets a little more torque. 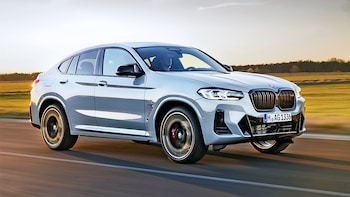 As part of the facelift, the prices of the X4 were also adjusted. Currently you have to invest at least 55,300 euros for the cheapest X4 version xDrive20i, the cheapest diesel xDrive20d costs at least 57,700 euros. The X4 is by no means a bargain, but with the right provider you can save a lot of money shortly after the facelift. At carwow.de there is the BMW X4 with a discount of up to 12,590 euros (As of December 5, 2021).

Top diesel with the highest discount

If you want this maximum discount, you shouldn’t have any reservations about diesel, engine capacity, performance or a lot of equipment. The discount of over 12,000 euros is possible for the most powerful diesel in the series. Instead of the list price of 76,300 euros, offers for the X4 M40d on carwow.de start at 64,700 euros and thus 11,600 euros below the RRP. Given the 340 hp from six cylinders, one Acceleration from 0 to 100 km / h in 4.9 seconds as well as the numerous equipment details, this is really an exceptionally good offer. Because despite the discount, you don’t have to do without the comfortable sports seats, the M sports differential, the aerodynamic package or the adaptive LED headlights. If you donate a few extra extras to the sporty diesel, the discount can climb to 12,590 euros (Attention: the transfer costs reduce the discount by a few hundred euros).

Of course, despite the discount, the X4 M40d is anything but cheap. Fortunately, carwow.de also has attractive offers for people with a slightly thinner budget. For example, there is the entry-level model, the X4 xDrive20i with 184 hp two-liter four-cylinder turbo gasoline engine, all-wheel drive and mild hybrid at least 8135 euros below the list price. The prices for the not quite so ostentatious SUV coupé from Munich start at 47,165 euros. After all, this corresponds to a discount of almost 15 percent. And that without the hassle of negotiating. (Attention: With this model too, the transfer costs reduce the discount by a few hundred euros).

Stella Vita: Is this what the electric future of the motorhome looks like?