Facebook Twitter LinkedIn Tumblr Pinterest Reddit VKontakte Odnoklassniki Pocket
Almost half a century! The VW Golf has shaped everyday German cars since 1974. The seventh generation of Wolfsburg’s long-standing bestseller was launched in 2013, and in 2019 it was inherited by number eight: space, comfort and workmanship have been the benchmark for the compact class in the last decade. And if a lot of special equipment has been ordered, there is even a premium atmosphere on board. Important for prospective buyers: 2017 there was for the Golf 7 a deep facelift. 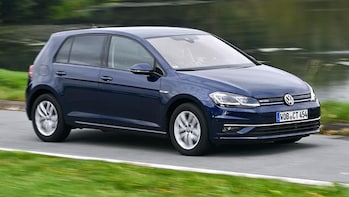 While only connoisseurs will notice the slightly changed light graphics with optional full-LED headlights, new rims and additional chrome jewelry, a lot more happened under the timeless shell with the characteristic wide C-pillars. Digital instrument clusters (Active Info Display) and fresh 6.5 to 9.2 inch infotainment systems with gesture control made the Golf 7 actually one golf 7.5. And it is an open secret that it is qualitatively better than its successor. The variety of drives covers almost every need.

VW Golf 7 used: which engine for which requirement?

For The refined running 1.5 TSI is recommended for petrol enthusiasts. The engine, which was introduced in 2017, pulls powerfully from the lower rev range and is willing to turn up to around 5500 tours. It was available from the factory with 130 and 150 hp. The greater power level does this golf to the GTI light and is now available for just under 15,000 euros. 8.3 seconds are enough for the sprint to 100 km / h, and he only runs out of breath at 216 km / h. How economical is the TSI? With a slight gas foot, five liters are possible thanks to cylinder deactivation, but an average of seven liters is realistic. The TSI penalizes motorway sections with a high proportion of full load with peak fuel consumption of more than 15 liters. The used 1.5 TGI, which is about the same expensive, slightly slower and much rarer, drives cheaper. It has 130 hp and in practice burns 4 to 4.5 kilograms of natural gas per 100 kilometers. The additional fuel tank covers emergencies. The 2.0 TDI appeals to frequent drivers. It complies with the Euro 6 emissions standard, pushes like a buffalo and still sips only four and a half to six liters of diesel. Like the late TSI with EA211 evo engines, the TDI also has a toothed belt with an extremely long 210,000-kilometer change interval, but causes higher fixed costs. Its economy still comes into play when a particularly large number of kilometers are to be unwound.

Compared to the original Golf 7, the facelift models are hardly more expensive

as typical second car and for commuting The e-Golf can be used from the periphery to the big city. Due to the quiet drive, the driving experience is significantly quieter than in a combustion Golf. The batteries (ex works with an eight-year or 160,000-kilometer functional guarantee) ensure a pleasantly low center of gravity. In the city, the instant suit is enormous. Pleasing for all interested parties: For the facelift models will be generally no significantly higher prices compared to the original Golf 7 called. You should also have that on the radar of younger used cars through the VW dealership As a rule, the guarantee can be extended to up to five years leaves. Equipped in this way, the bestseller can also be used as a reason car for all cases.