Presentation and price: Golf 8 R starts at just under 52,000 euros

VW put the R on the Golf 8. Behind the well-known recipe – four cylinders, all-wheel drive – lies a dynamic fine-tuning, which should help the top Golf to have significantly more fire and driving pleasure. 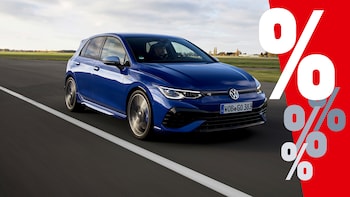 VW Golf 8 R with a discount at carwow.de

The best evidence of this is the new drift mode, with which the Golf R can also be driven across corners, as well as a new R performance package with Vmax increase. The 320 hp Golf R is available at a base price of 51,835 euros, for the station wagon version Variant at least 53,115 euros are due.

In 2002, VW launched its sportiest compact model, the Golf R32. Its 3.2-liter VR6 developed 241 hp and made the R32 the most powerful Golf that VW has built to date.
In the summer, sport golf celebrates its twentieth birthday. VW took this as an opportunity to put an exclusive special model of the compact sports car with the suffix “20 Years” on the wheels. The two-liter turbo four-cylinder has been tackled again and now delivers a whopping 333 hp. It has 13 hp more than the regular Golf R. The special Golf can be ordered from June and will be built for around a year.

First VW with real carbon in the interior

In the Golf R “20 Years”, the power plus is already staged with the emotional start that can be selected by the driver. A speed overshoot is activated at 2500 tours, and a particularly present acoustics should set the mood for the journey. Transmission and engine tuning have been fine-tuned to improve driving dynamics.

The Wolfsburg-based company has also put on a visual touch, the R-Performance package with “drift” mode and larger rear spoiler is standard here. The design of the special model is emphasized again by blue details such as the rims and the mirror caps. In the interior, the Lower Saxony are using real carbon on the instrument panel and door panels for the first time.

Anyone interested in a used Golf R from the previous generation has a huge selection to choose from. Well-maintained pre-facelift models start at around 20,000 euros on the used car market. For facelift models, around 5000 euros more are due, with the performance issue of 300 or 310 hp not playing a major role. For a Golf 7 R station wagon you have to invest around 23,000 euros and more.

Golf R Variant: The sports Golf with plenty of space

For all those for whom the compact five-door does not offer enough space, VW has also given the Variant a performance update. The trunk of the 4.63 meter long Golf R Variant holds between 611 and 1642 liters with the rear seats folded down. The sports suit is also available with an optional trailer hitch for a towing capacity of 1.9 tons.
So much for the practical capabilities, but of course the R Variant should also be really sporty. It relies on the same drive combination as the five-door model and, together with the Arteon R Shooting Brake, is the most powerful sports station wagon in the portfolio.

Engine and transmission: First production Golf with a top speed of up to 270 km/h

The source of the propulsion is the two-liter turbo four-cylinder EA888 in the Evo4 expansion stage. Among other things, a fully electric coolant control is new: it shortens the warm-up phase and thus optimizes the efficiency of the drive. As in the Arteon R, the unit delivers 320 hp and 420 Nm of torque.

Depending on the configuration, that’s 10 to 20 hp and 20 Nm more than the predecessor – and ten hp more than the Audi S3. With DSG, the four-wheel drive sprints from 0 to 100 km/h in 4.7 seconds. The R-Performance package, which costs 2265 euros, is optionally available. It raises the top speed from 250 to 270 km/h.
The performance package also includes a larger rear spoiler, 19-inch wheels (for the big AUTO BILD summer tire test 2021) and the two additional driving modes “Special” and “Drift”. In the drift program, the standard seven-speed DSG offers a real manual mode, so it does not switch up by itself at the limiter.

In the eighth-generation Golf R, too, the power is distributed to all four wheels. Thanks to the new rear axle drive, the 4Motion all-wheel drive can distribute the torque not only between the front and rear axles, but also between the rear wheels – up to 100 percent to a single wheel.

In addition to the limited-slip differential and the standard DCC adaptive suspension, the all-wheel drive is also part of the integrated driving dynamics manager in the Golf R. This means that understeer should no longer be an issue, and all-wheel drive should also guarantee optimal traction, more cornering agility and more driving precision. You can read how the whole thing drives in the comparison test with the Porsche 718 Cayman.
Compared to the GTI, the R has three additional driving profiles. “Race” deactivates the sailing function, sharpens the exhaust sound and sets all systems to attack. The “Special” setting is designed for the bumpy Nürburgring and is already known from the GTI Clubsport. It should give the R a time advantage of 17 seconds over its predecessor in the “green hell” of the Nürburgring.
The drift mode is completely new. In the “ESP Sport” position, the all-wheel drive system distributes the power so that corners can be taken laterally, similar to the Ford Focus RS or Mercedes-AMG A 45 S.

The Golf R features DCC active damper control as standard, and it sits 20 mm lower on the road than the production Golf. Spring and stabilizer rates have each been increased by ten percent compared to the predecessor, and the front wheels have been given more negative camber.

A stiffer aluminum subframe lightens the front axle by three kilograms. The brakes with 357 mm discs at the front are also 600 grams lighter on each side. If you want to use the last tenth on the racetrack, VW offers optional 19-inch semi-slicks for the Golf R.

The R front comes with a clubsport-like apron and its own grille with horizontal slats. The LED headlights are connected by a strip of lights with a blue decorative stripe and R logo. New rocker panels and R-specific rims stand out in profile. The base is 18 inches, 19 inches are available as an option. The rear is adorned with a central R logo, a black diffuser and the four tailpipes of the flap exhaust.

As usual, a titanium flap exhaust from Akrapovic is available for an extra charge. It makes the Golf seven kilograms lighter and the wallet around 3975 euros lighter. If you have opted for the R-Performance package, VW will screw a larger rear spoiler onto the trunk lid. More subtle R insignia include gloss black accents and the silver exterior mirror caps.

Interior: Larger shift paddles in the cockpit of the Golf R

There are no big surprises inside. The driver and front passenger sit on the well-known integral sports seats, which come up with black and blue covers on the R. Carbon-look trim parts, a couple of R logos, the black roof liner and stainless steel pedals create a sporty flair.

Another accent in the same direction is the steering wheel with 6 o’clock marking and – finally – larger shift paddles. In addition, the button for setting the driving modes has moved from the center console to the steering wheel.

Behind the valance sits the Digital Cockpit Pro with its own R graphics and two additional views. What is new is that the rev counter can be placed in the middle. “R-View” brings a horizontal rev bar, numeric displays and a shift light.

The digital cockpit also has a lap timer and all sorts of vehicle data ready – from boost pressure, transmission temperature and G-forces to the current power demand and the torque distribution of the all-wheel drive.

With the motorhome on the ferry: Guide