Facebook Twitter LinkedIn Tumblr Pinterest Reddit VKontakte Odnoklassniki Pocket
The VW ID.3 could get a facelift in 2023. The first model of the all-electric ID family looks almost a bit outdated in terms of the design of newer vehicles and could therefore be adjusted visually. The How To Cars illustrator has already considered what the facelift can look like! 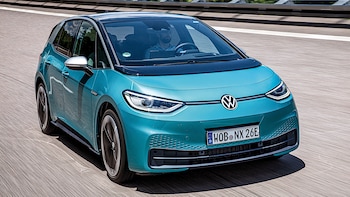 At carwow.de there are cheap new cars, including the new VW ID.3.

There could be a lot to do with the facelift of the VW ID.3, especially at the front. The air inlet in the apron, which has been kept rather discreet so far, could be larger and the compact model could thus move closer to the significantly larger ID.Buzz.

A new light signature at the front and adapted rear LED lights round off the overall visual package. In the interior, Volkswagen could use higher-quality materials and less hard plastic. The smallest ID to date has had to listen to a lot of criticism since its market launch.

More range and all-wheel drive possible for the ID.3

Technically, not much will change for the facelift. A higher charging power of more than 135 kW would be possible, an adapted cell chemistry in the battery packs could increase the battery capacity and thus the range.
The power of the electric motor on the rear axle could be increased; VW may even be thinking about an ID.3 GTX with all-wheel drive. The facelift could also bring a sports version with 340 hp. AUTO BILD has already driven the prototype of an ID.3 X.