● Polo Facelift drives up without diesel engines
● Up to 9.2-inch touchscreen for infotainment
● Prices start at 17,115 euros

Of the VW Polo gets a facelift: almost four years after the presentation of the sixth generation of the popular small car are sharpening the Wolfsburg. The Polo is technically and visually closer to its big brother, the Golf, and after the revision it looks more adult.

Let’s start our tour in the classic way with the new face of the VW Polo. At the front, Volkswagen is generous and is already giving the small car in the future in the base LED headlights and a new daytime running light. Optionally there is Matrix LED lights and a continuous strip of lights at the frontline. The aprons have been redesigned at the front and rear and freshen up the design.
The Wolfsburg-based company is offering a total of seven new types of rims for the facelift, two of which are to be designed to be particularly aerodynamic (for the AUTO BILD summer tire test). The new, two-part tail lights always come to customers with LED technology, so surcharges are no longer an issue here. The rear lights have the now typical flip-flop light graphics, in which part of the rear light is transformed into the brake light when braking.

Interior: digital cockpit in VW Polo will always be standard in the future

Inside, the Wolfsburg-based company is upgrading what has gone out of style after four years of construction. The analog round instruments disappear and are consistently against a Digital cockpit exchanged (8 inch base, 10 inch optional).

In the future, the steering wheel will have buttons in every equipment variant and comes from the entry-level version of the Golf. Also one mechanical air conditioning and electric mirrors can be found in every Polo from the facelift onwards. In the Climate control the buttons disappear, the Polo receives one here Touch control unit. With infotainment, the 9.2 inch touch screen from Arteon and Tiguan to the small car, thanks MIB3 infotainment The Polo can also handle Apple CarPlay and Android Auto wirelessly for a surcharge. The feeling of space corresponds to that of the predecessor, the workmanship makes a reasonable impression in the first test. The surfaces in the interior are partially foamed, so the Polo is not a pure hard plastic desert.

For the facelift, the Wolfsburg-based company has the Equipment lines of the polo re-sorted and customized. In the future, there will be a little more emphasis on packages and less on individual options that could cause confusion in the configurator. In addition to the basic equipment, there are the “Life”, “Style” and “R-Line” lines. For the market launch there is also the “Fresh” special model, which can only be ordered in 2021 and can be selected in different colors at no extra charge. All regular equipment at a glance: Polo: the basic model● LED headlights● LED taillights ● Multifunction steering wheel● Lane Assist● Center airbag● 8 inch digital cockpit● 6.5 “Composition Media” with bluetooth● heated and electrically adjustable exterior mirrors Life: the middle equipmentIn addition to the “Polo” base● Alloy rims in 15 inches● App-Connect (Apple CarPlay and Android Auto)● additional USB-C interface in the rear● Leather steering wheel and gear knob

The revised Polo is already available at discounts on the Internet. The discounts vary depending on the equipment and engine. Experience shows that there are greatest savings for the most powerful version in one of the top equipment. In the normal Polo, this would apply to the 1.0 TSI with 110 PS and DSG in the R-Line. You can find changing offers on carwow.de (cooperation partner of AUTO BILD) here: 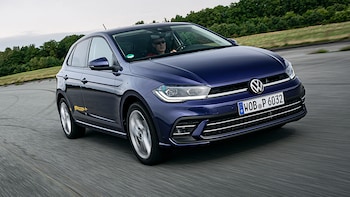 At carwow.de there are inexpensive new cars, including the current VW Polo.

Assistants and safety: every Polo gets a center airbag for a facelift

As befits a facelift, Volkswagen has also given the Polo new wizards and other security features. This includes the standard center airbag: It is located in the driver’s seat and inflates between the two front seats in the event of an accident. An emergency braking assistant is already included in the basic Polo. In the future, the cruise control together with the lane assistant will result in the optional “Travel Assist”. The system can be armed with a push of a button on the steering wheel and helps the Polo to semi-autonomous driving according to level 2. The driver has to keep his hands on the steering wheel, but the Polo then drives largely by itself.
This is also new for the Polo predictive ACC: The expansion of the cruise control is based on local speed information, town entrances, intersections or roundabouts and adapts the speed accordingly. However, DSG and navigation are required here, as GPS data must also be called up.

Basically, two different infotainment versions are used in the Polo. While the entry-level infotainment versions still use the old one MIB2 (Modular infotainment kit), VW uses the now appropriate one for the higher versions MIB3 a. It allows functions like Apple CarPlay and Android Auto also wirelessly and makes connecting the phone more convenient. The top system “Discover Pro Media” will be equipped with a larger touchscreen as part of the model update.

In future, the system will be operated via a 9.2-inch touchscreen, which was already used in the Golf 7 and can currently be found in the Tiguan and Arteon, among others. Rotary controls are omitted with the new screen and are replaced by touch surfaces at the edge. This makes the look more elegant, but the new concept does not do the operation a favor.

Engines and prices: no diesel, instead natural gas

When it comes to engines, VW is reducing the offer a little. A polo with There will be no more diesel engines, the 1.5-liter petrol engine with 150 hp is also out of the range. The 1.0-MPI naturally aspirated engine with 80 PS is still the entry-level model, followed by the 1.0 TSI models with 95 and 110 PS. There it remains with manual five-speed transmissions; if you want more gears, you have to use the optional seven-speed DSG for the turbo engines. Or to the natural gas drive: The 1.0 TGI engine remains in the program, has an output of 90 hp as before and transfers its power to the wheels via a six-speed manual transmission. The Polo GTI remains the top model with 207 hp.

Motors at a glance: