Facebook Twitter LinkedIn Tumblr Pinterest Reddit VKontakte Odnoklassniki Pocket
All high seats begin with a T. At least that applies to the VW model range. The VW T-Roc presented in 2017 drives in length and width in the footsteps of the bestseller Golf, but built 13 centimeters higher. Due to its compact shape with noticeably flared wheel arches and the sloping tailgate, the appearance is independent. 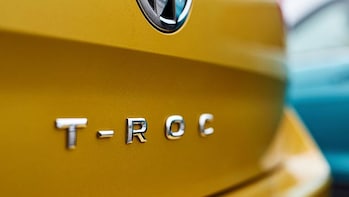 Used VW T-Roc with guarantee – from selected dealers! (in cooperation with HeyCar)

Our test vehicle from Kuhn & Witte in Jesteburg, Lower Saxony, was that when it was delivered in 2018 Top model of the series. According to the Schwacke database, this T-Roc was new in April 2018, including popular extras such as one navigation system and LED headlights a hefty 34,945 euros. Now it would be available for 22,249 euros. Almost 100,000 kilometers on the clock can be seen in the urano-gray Compact SUV not on. The passengers sit a good half a floor (10 centimeters) and comfortably upright golfDrivers. In direct comparison, there is a little lack of leg and shoulder room on the back seat.

VW T-Roc: Almost as much space as a small station wagon

Of the The trunk offers a volume of 445 to 1290 liters almost as much space as a small station wagon. The steering is pleasantly direct, the stiff chassis free from rumbling. In the interior nothing rattles except for the lightly built trunk cover. A few stone chips at the front are an indication of much rapid motorway traffic. Unusual for one VW are the partial simple-looking interior solutions. Abundant sensitive hard plastic and one missing center armrest one would expect more in a small car. And if you want to use the AppConnect function of the logically structured on-board infotainment, you have to have it activated afterwards for a fee.

How does that drive T-Roc? The standard all-wheel drive with Haldex clutch in the 2.0 TSI is also installed in the Tiguan. It reliably ensures plenty of traction under all conditions and a pleasantly neutral driving behavior. This is especially true in comparison with the front-wheel drive T-Roc variants with a single twist beam rear axle. The hour of the two-liter Euro 6 engine strikes when it can really work hard. The powerful sounding engine has an output of 190 PS and 320 Newton meters of torque. This is how the T-Roc to the unexpected sprint talent. 7.2 seconds to 100 are enough to irritate the driver of some heavy business sedans for a long time.

Thrift is not the discipline of the 1.5-tonner

At the gas station, there will probably be a tie again, because this 1.5-ton truck is not really economical. Six and a half liters are also possible, but the gasoline engine is fast moving up to ten liters of super per 100 kilometers. And an off-roader is one T-Roc despite its rock-hard name, definitely not. The manageable one takes care of that Ground clearance of only 16 centimeters – and a massive underrun protection is also not available for the model. The front apron of our test vehicle was in perfect condition. If this is badly scratched, the car was probably misinterpreted as being off-road.

A subtle facelift has been announced at the beginning of 2022

The all-wheel drive makes the German-Portuguese more of a useful towing vehicle: 1700 kilograms (up to twelve percent incline) are a very respectable figure for a compact car. Important for those interested in used: In November 2018, an OPF version with a particle filter replaced the version tested. From this point on, the fulfilled T-Roc the emission standard Euro 6d-Temp-Evap-ISC. At the end of 2020, the changeover to the current Euro-6d-ISC-FCM standard took place. For the beginning of 2022 is also a decent one Facelift announced. This includes, among other things, a slightly revised front design and an upgraded interior. The one tested here will look old T-Roc but by no means.