Prices for the new SUV coupe at less than 20,000 euros

In Brazil, VW has been offering the T-Cross as a chic SUV coupé since summer 2020. There the series is called “Nivus”. Now the European version has been presented – with a new name: Taigo. Thanks to the initial “T”, it fits in better with the other SUVs in the Wolfsburg-based range. In addition, the design has been adapted, there is more equipment including a sporty R-Line and more choice of engines. It is built in Pamplona, ​​Spain. The market launch for the new VW Taigo is from December 2021But what it costs is already certain. The base is available for 19,350 euros (with a discount a good 4,000 euros cheaper). The prices at a glance: 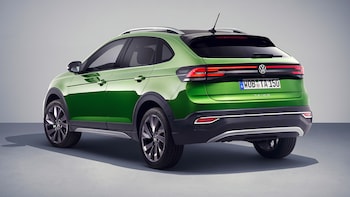 Look: more elegant and sportier than the T-Cross

The design is significantly less playful than the T-Cross. Instead, the Taigo looks sportier and more elegant – and not just because of the sloping roof line. This is of course particularly effective with our photo vehicle in the R-Line equipment (not available for the T-Cross). The grim-looking LED headlights are equipped with matrix LED technology and a continuous strip of lights in the higher versionsas most new VW models have. The apron is shaped by a large central air inlet.

In addition to the new shape of the rear, the changed light signature is particularly noticeable. It is flatter than that of the SUV brother with a regularly shaped back. However, the relationship remains recognizable, after all, the light elements are also housed on a black element in the SUV coupé. The rear apron, on the other hand, is independent; the R-Line model shown naturally makes a lot of difference, because its design stands out again from that of the other equipment. It is painted in the vehicle color, a black insert with chrome-colored stylized tailpipe trims is closed off at the top by a continuous reflector. There is a black diffuser underneath. The planking does not quite fit into the picture. With the R-Line, only the wheel arches are framed by this rather robust feature; the other equipment also includes sills and aprons.

Dimensions: With trailer coupling and a trailer load of up to 1200 kilos

Like the T-Cross, the Taigo is also on VW’s MQB-A0 small car platform, but it is longer and flatter. Despite the coupe-like shape, however, the car offers similar amount of space in the trunk. The Taigo has a capacity of 438 liters, while the volume of the T-Cross varies between 385 and 455 liters due to the sliding rear seat. Curiously, there is a detachable towbar for the small SUV, depending on the engine, it can pull up to 1200 kilos. The dimensions at a glance:

Interior: A digital cockpit is standard in the VW Taigo

AUTO BILD has already tried the seat in the new Taigo. The interior resembles that of the current Polo. A digital speedometer is standard. In the base it measures eight inches, optionally it grows to 10.25 inches. The central display for infotainment is on a visual axis next to it. Our photo vehicle has the largest version with a 9.2 inch screen diagonal. The display is only that big for a surcharge, otherwise it measures 6.5 “or eight” as standard, depending on the equipment.
Behind this, of course, is VW’s current MIB3 system with eSim. Smartphones can be connected via Apple CarPlay or Android Auto, depending on the equipment also wirelessly. As for the control of the air conditioning: don’t worry! The digital control unit is optional; the temperature is set analogously as standard. The materials in the interior are all good for this class, the dashboard, for example, always has a soft touch.

VW models in leasing at sparneuwagen.de

Despite the sloping roof line, there is a surprising amount of space

But the exciting question with this roof shape is: How do you sit in the rear? Surprisingly, there is more space here than expected. There are two reasons. VW has lowered the bench a little and the roof only drops really steeply from the C-pillar, i.e. behind the passengers. With a height of 1.65 meters you have a lot of space here, but you shouldn’t be too tall either. From 1.85 meters, sitting in the back is probably no longer fun on longer journeys.

Equipment: A panoramic pop-up roof is available as an option

The assistance and safety equipment is also similar to the Polo. As standard there is, for example, a center airbag between the front seats, a lane departure warning system and an environment monitoring system with a collision warning system. Optionally, the SUV coupé can drive semi-autonomously. There will be four equipment lines for the Taigo, one more than for the T-Cross, because the new model is also available in the sporty R-Line right from the start. Of course, you can also make a few crosses with the special equipment, for example there is a panoramic pop-up roof or a differential lock for an extra charge. These are the highlights of the different lines:

● Life: The middle equipment also comes with a leather steering wheel, roof rails and a projection light in the exterior mirrors that draws a check pattern on the floor when the car is opened.

● Style: The focus here is on “elegance”. Visually, this equipment stands out through a modified rear apron with chrome strip and silver-colored diffuser. Matrix LEDs and LED fog lights, 17-inchers, front and rear parking sensors, 10.25-inch digital instruments, eight-inch infotainment and seat heating at the front are on board ex works.

● R-Line: As usual, this is the sportiest looking standard equipment. It can be recognized by its own aprons and paneling, some of which is painted in the vehicle color. Matrix LEDs and LED fog lights are standard, as is its own checkered seat cover, the black sky and the heated seats in the front. If you also choose that Black style package, various chrome trim elements are blackened, there are tinted windows and 18-inch rims.

For the Taigo, VW offers a three-cylinder engine and a four-cylinder on, all petrol, there is no diesel. The one-liter three-cylinder has two power levels. The weaker version has 95 hp and 175 Nm, shifting is always done via a five-speed gearbox, the stronger version has 110 hp and a smooth 200 Nm. A six-speed gearshift or a seven-speed DSG are available here. The most powerful version is offered with one more cylinder and 1.5 liter displacement. It makes 150 hp and 250 Nm, the seven-speed DSG is standard here.

Blow for the tax authorities: savings tax in violation of the law