Since 2011 the VW Up as the successor to the series Fox and Lupo on the market. Its biggest advantage over its three-door predecessor: The Up has also been sold as a five-door since 2012. In addition to the Electric version is the Microcar exclusively as Three-cylinder to have. The basis forms the One-liter gasoline engine with 65 hp and 91 Nm maximum torque. Depending on the equipment line, the Price from 13,800 euros, for the slightly more sophisticated standard equipment R-Line are due at least 15,595 euros.

As an alternative to the gasoline engine, there is also a natural gas drive. in the eco Up the three-cylinder then comes on 68 hp and up to 90 Nm. The base price for the natural gas variant is included 16,365 euros. It is shifted by hand over five gears as standard – on automatic transmission cannot be ordered.

The smallest car in the VW portfolio also got a fully electric offshoot in 2013. In 2019 the VW e-Up revised again, especially the one battery pack benefited from the update: the capacity changed from the original 16.4 kWh to 32.3 kWh. So the Range on 260 kilometers according to WLTP. There is an electric motor on the front axle 61 kW (83 PS) and 212 Nm Torque to use.

However, the base price of around 22,000 euros and the increased purchase premium for electric cars increased demand so much that the e-Up – similar to its technology brothers Seat Mii Electric and Skoda Citigo e iV – Can no longer be ordered since September 2020. According to VW, the electric Up will no longer be offered as a new car in Germany in the future.

VW Up GTI: More power thanks to turbo charging

For more driving fun, the Wolfsburg-based company has also been offering one since 2018 GTI version of the VW Up. This is particularly noticeable because of its sharper look with larger air inlets in the front apron. In addition, the Up GTI, which is 12 millimeters lower, always stands up 17 inchers. The Wolfsburg is standard with a 6-speed manual transmission served. Thanks one Turbocharging tear in 1.0 liter TSI of the Up GTI 115 PS and 200 Nm Torque on the front axle.

Compared to its predecessors Fox and Lupo, the Up is visually much more stylish and more modern. The Wolfsburg does not have large air inlets in the front Front apron. However, they look less modern Headlights, the road is still going with Halogen technology illuminated.

Behind the B-pillar of the Up, the window line makes a bend and rises slightly upwards – at least in the three-door model. Of the wheelbase from 2.42 meters should provide more space in the interior, the overhangs at the front and rear are correspondingly short for one Total length of 3.60 meters. The tailgate is made of dark-tinted glass and optically integrates the tail lights. But these are not part of the trunk lid.

Interior: buttons instead of touch controls

In the interior, the age of the Up can be seen more clearly. Instead of one Digital displays can still be found behind the wheel classic round instruments. Radio and air conditioning are still operated with buttons for navigation there is a smartphone holder in the center console instead of a central display. In the second row of seats there is enough space for two people, behind that is the 251 liters size Trunk. If you fold the rear seat bench, the result is a load volume of up to 951 liters.

Buying advice: As a three-door model, a real recommendation

The clear lines of the up not only look stylish, they also suggest a reference to the premise “Form follows function”. The first row of seats offers hardly less space than a golfwhich is particularly noticeable in tall people in terms of leg and headroom. Due to the narrow width of the vehicle, however, the occupants sit relatively close to one another. Prospective buyers but it must be clear that there is not enough space for long-legged people behind one another.

Error diagnosis, coding and used car check: With the OBD adapter for Android and iOS you can take back control of your car! * Discount code: “BLACK25”

Even that Trunk lack of size. Bulky items can only be accommodated in the upstairs with the second row of seats folded down. Buyers of the three-door version benefit most of all from the Up easier entry and a better one All-round visibility looking over the shoulder. Through the rising window line behind the B-pillar this is also drawn more skillfully. The best argument for that Three-door: He saves at least 520 euros surcharge a.

Used car check: what to consider when buying

You can tell the microcar Up not on, he convinces with comfortable seating and one well-tuned chassis. Technically, the Wolfsburg has some problem areas of his predecessor Fox Fixed. Indeed typical problems with the Up there are jammed door locks, leaky air conditioning systems, cracking panorama roofs, whistling gas pressure regulators with the EcoFuel and torn heat shields. 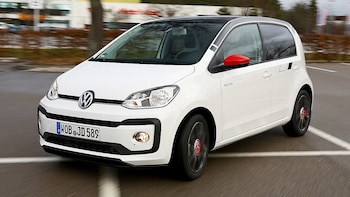 VW Up as a used car with a guarantee – from selected dealers! (in cooperation with HeyCar)

In addition criticized the TÜV the function of Foot brake, from the seventh year also the Parking brake. Brake discs and lines cause few problems. More polluting Oil loss occurs only to a small extent during the up. On the other hand, the VW Mini is prone to problems with the exhaust system.

Here are some things to look out for when buying a used VW Up:
• stuck door locks
• leaking air conditioning
• Function of the foot brake / parking brake
• Exhaust system

VW e-Up to buy as an immediately available storage trolley VW e-Up to buy as an immediately available storage trolley

WRC: “Hybrid is a good solution for the rally”