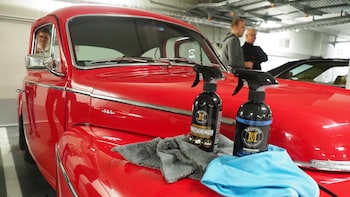 Instead of a fixed roof, the Cayenne about a electric soft top. To improve the torsional stiffness, a strut is installed between the B-pillars, which is what the Cayenne gives a touch of PT Cruiser flair when the top is open. Strangely enough, they have Doors still over pane frames, which looks rather misshapen, especially with the rear doors.

The base of the remodeling is a 2010 Porsche Cayenne GTS with 405 hp 4.8 liter naturally aspirated V8 and automatic. The latter is not entirely unimportant to mention, after all, there was GTS also with manual transmission. According to the advertisement, it should even be one Transsyberia version built only 600 times Act. But that is doubtful, because identifying features such as specific rims, door sills and the raised chassis are missing in the pictures. Of course, the characteristic LED lights on the roof, too, with one of them Convertible is not surprising.

The Cayenne was repainted in matt black and provided with dark taillights. According to the advertisement, it should be the equivalent of around two previous owners 99,000 kilometers down and be in good condition. The car will be sold in Texas via the Facebook marketplace. The called price is converted around 40,000 euros.

Error diagnosis, coding and used car check: With the OBD adapter for Android and iOS you can take back control of your car! Discount code: “XMAS25” (* only in conjunction with Carly +).

Another clue that this isn’t a true Transsyberia. They are usually well into the six-digit range. But the price shown here is steep, normal GTS 4.8 are around 10,000 euros cheaper on average. However, this Porsche is anything but a normal Cayenne.