The sun is to blame. You can often see it on older vehicles: Unpainted plastic parts the body will fade over time as a result of the UV radiation. It can even go so far that originally black components turn light gray or almost white. There are many tricks and tweaks that should bring the plastic back to its original color. But not only a few household tricks such as salad oil or shoe polish do not give long pleasure, many too Plastic care products do not do what they promise. The processing is often not as easy as described, and it quickly ends up in a mess. Right here comes the Plastic freshener Polytrol the company Owatrol comes into play. Simply apply it, leave it on for a few minutes and wipe it off. But is it really that simple? And do the parts actually look like new afterwards? AUTO BILD has tested the Polytrol plastic freshener!

Even when you unpack it, you notice that the Polytrol plastic freshener is different from the shoe polish-like care products from other manufacturers. Polytrol is not supplied in a tube with a sponge or brush, but in a small one Metal can with screw cap. This is mainly due to the fact that Polytrol is neither gel nor black paste, but a oil is. If you unscrew the cap on the metal can, the smell of the oil quickly fills your nose. This may be unpleasant for sensitive noses, but smells more natural than chemical and is strongly reminiscent of linseed oil varnish from the carpenter’s supplies. A special surprise effect occurs when you see the color of the oil for the first time. Because it’s not black, it’s already almost transparent. At this point, at the latest, we began to have doubts as to whether the plastic parts would actually look like new or rather shiny and greasy. 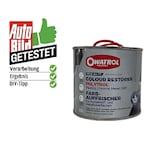 The detailed operating and warning instructions are printed on the can in English and German. It is pointed out that Polytrol is not flammable per se, but rags that have been used to apply or wipe off the plastic freshener. self-ignite can. So caution is advised here. To protect the skin, gloves should be worn when processing Polytrol.

This is how the Polytrol plastic freshener works

In order to use the Polytrol plastic freshener, you still need some utensils that are not included when you buy the metal can. These include, among other things Soapy water, a brush, silicone remover and some Cloths. Before applying the Polytrol to the plastic, it is important to thoroughly clean, degrease and allow the component to dry. According to the manufacturer, Polytrol forms a stable film on the plastic surface. If the component is oily or greasy, this film cannot adhere. And if there are impurities on the plastic surface, those under the Polytrol film are trapped and ruin the result.
This hard film, which the Polytrol forms after drying, also involves a work step: All components that are not to be treated with Polytrol must generously masked will. If you realize too late that you have spilled with Polytrol, it can only be removed by stripping. Needless to say, this is harmful to other plastic parts or the body paint. One last step before caring for the plastic: You should first test in an inconspicuous place whether the plastic is compatible with the Polytrol.

To prevent the Polytrol from drying too quickly, it is important that it is not used on hot plastic parts or in direct sunlight. Processing is very easy. If the component is clean and free of grease and all components have been carefully taped all around, the plastic freshener is easy to use paint brush or one lint-free cloth applied. The finer the brush, the more precisely you can apply the Polytrol. Owatrol describes how much Polytrol should be applied until the porosity is saturated. Once that has happened, all that remains is to start a timer. Approximately ten to fifteen minutes should the Polytrol oil on the plastic act. Depending on the plastic, you can watch how the material slowly becomes darker and darker.

After the exposure time has expired, the excess Polytrol is thoroughly cleaned with an absorbent, lint-free cloth wiped off. Thorough wiping is also really important here, because even on plastic parts, dried-on Polytrol can only be removed by stripping. Depending on your needs, you can repeat the process until you are satisfied with the result. If you want more shine, the surface can be polished with gloss wax. Important: The wax is allowed no abrasives contain. We also recommend this step only on smooth plastic surfaces.

Conclusion: what good is the Polytrol plastic freshener?

We have to say: The Polytrol plastic freshener from Owatrol really surprised us. the Processing is just child’s play – and if you have worked thoroughly, the result is also completely convincing. The direct before-and-after comparison in particular shows how rich and deep black the plastic parts look like again. They are neither oily nor greasy, as is often the case with silicone-based plastic care products. The plastic components actually simply take on the color that they left the assembly line in. Of the Expenditure of time depends of course on the size of the plastic surfaces, but in half a day you should be able to get a car with large plastic bumpers and components stylish again. Ultimately, it can be said that the Polytrol plastic freshener is a simple, quick and good way to give the plastic parts on the car a fresh look.